The Demonata: Lord Loss (The Demonata series) by Darren Shan. Read online, or download in secure EPUB format. Lord Loss (Electronic book text, ePub ed) / Author: Darren Shan ; ; Horror & ghost stories, chillers, Adventure stories, Fiction, Children's. This content was uploaded by our users and we assume good faith they have the permission to share this book. If you own the copyright to this book and it is.

Why does the protagonist in Cirque du Freak bear your name? That was the name I used when I first released Ayuamarca. Did you set out to deliberately veer as far away from the traditional image of the vampire as possible? Is there a little message there, perhaps, about tolerance for spiders?

Actually, I was originally going to give him a pet rat, since rats are intelligent and can be trained to perform tricks. But that would have been dramatically unspectacular, given the flamboyance of the rest of the Cirque Du Freak performers, so I started thinking about what would creep me out if I was watching the show. But when I held one up close and spent some time with it, I began to see how incredible spiders are, and overcame the worst of my fears.

Did that scene cause any concern for your publishers? At what point in the Cirque du Freak books did you realize it was going to be a very long series?

I knew when I started the first book that it would be open-ended, and I thought that I might go on to write a handful of books, assuming I enjoyed the writing process and could get a publisher interested in publishing it.

I had only a very simple aim in the early days—I thought it might be a Kung Fu-type short series of books, only instead of David Carradine going around the Wild West, this would feature a young vampire having supernatural run-ins with various creatures.

By the end of book two, I knew it was going to be far longer and more ambitious than I had originally imagined—anywhere between ten and twenty books, I figured. Were you at all involved with the manga adaptation of The Saga of Darren Shan? My Japanese publishers sent me sample work by several artists who had been shortlisted. They each roughed out their proposed first chapter, then all the pieces were sent to me. I nominated him as my first choice, and he was given the job.

After that I had nothing more to do with it, until it was being translated into English, when I went through the translations of each volume and tweaked them slightly, to make the narrative voice mirror that of the books more closely.

For your next series, The Demonata, what made you decide to tell the story in present tense? Was that difficult to maintain over ten books? The story felt to me that it needed more immediacy and intimacy. So, obeying my gut instinct, I went back and started over, in first person present tense, and I knew instantly that it was right for that book. 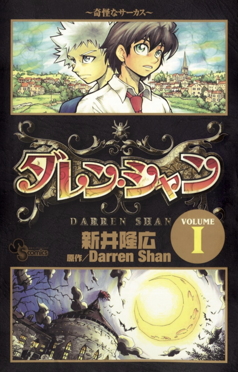 If I had, maybe I would have reconsidered, but in the end I think it worked perfectly. It presented some challenges, because of the sheer scale of the series, but at the same time I think it made it much more accessible than it might otherwise have been.

The Demonata is a very complex, challenging story, featuring three narrators, and moving backwards and forwards through time. But because of the first person, present tense narrative, each book is quite straightforward to read.

The Demonata books also jump around in time—the fourth book released, for example Bec is set in about the fifth century A. How do you keep that sort of chronology straight throughout such a long series? It was tricky, because it was never meant to be a series!

After that I wrote Slawter, which became book three, then finally Demon Thief, which became the second book to be published. Demon Thief gave me my over-arching structure, and from that point onwards it was relatively plain sailing. I spend at least two or three years on each book that I write, with long gaps in between each edit.

Can you talk more about why that is? But I think the change in the main character is one of the reasons I like it so much. A simple message, I know, and maybe I hammer it home a bit too much at times in The Thin Eexecutioner, though I think I managed to make it an entertaining and frightening book too.

The world and the mythology in The Thin Executioner is distinctly Middle Eastern in tone, although the novel was inspired originally by The Adventures of Huckleberry Finn. How did you come to combine those two elements?

It was initially inspired by a drawing in a Philip Pullman book, of an executioner with a hood over his head, the sort of picture you find in cartoons everywhere. Then my mind turned to Huck Finn and the story began to assume more gravity, as I saw that I could take it in a much more serious and dramatic direction.

And then I went on holiday to Jordan in the Middle East, where the rest of the story came together. Many of your stories seem to center on a relationship between a young person and an adult mentor.

Was there someone in your own life who inspired that? Not really.

But I think most of us would have loved to have a Ben Obi-Wan Kenobi or Gandalf-type figure in our early lives, to help show us the way to becoming a solid adult. Your newest series is Zom-B, and is projected to run twelve books, with a new book released every three months. Are You There God? Artificial Condition: The Hyperspace Project: Beauchamp Hall: Big Nate: Billionaires in Disguise: Rae, Complete Omnibus Edition: Blood Bond: Blood Communion: Capture Me Capture Me: Book 1: Center Stage: Chained by Love, Vol.

Other books: THE SIGNAL AND THE NOISE EPUB

Seuss' The Grinch: Inside Out: Journey Into the Mind: Isfolket 10 - Vinterstorm: Killer Species 3: Killer Species 4: Killing Commendatore: Killing Floor: Kingdom Hearts: Leverage in Death: Look Alive Twenty-Five: Making Her His: Middle School: Mine For Christmas: Muscle Myths: My One and Only Duke: Never Look Back: On the Run: Once Friends: One Simple Change: Past Tense: Pieces of Her: Plague Wars: Infection Day: The First Trilogy: Prisoners Wing of Fire: Quantum Tangle: Racing in the Rain: Resisting Roots: Robert B.

Rogue Protocol:Leverage in Death: Demonata 5 - Blood Beast: Grubbs Grady has so far escaped the family curse, but when he begins to experience alarming symptoms at the onset of the full moon, he is scared that the jaws of fate are opening and about to swallow him whole.

When he opts out of a family weekend trip, he never guesses that he is about to take a terrifying journey into darkness.

Past Tense: Kingdom Hearts: Demonata 8 - Wolf Island: Grubbs Grady treads new ground in this, the eighth dramatic title in the Demonata. The Disciples are falling. Bec has formed an unholy alliance with Lord Loss.

SIMONNE from Cleveland
I am fond of unnecessarily. Feel free to read my other posts. One of my extra-curricular activities is softball.
>